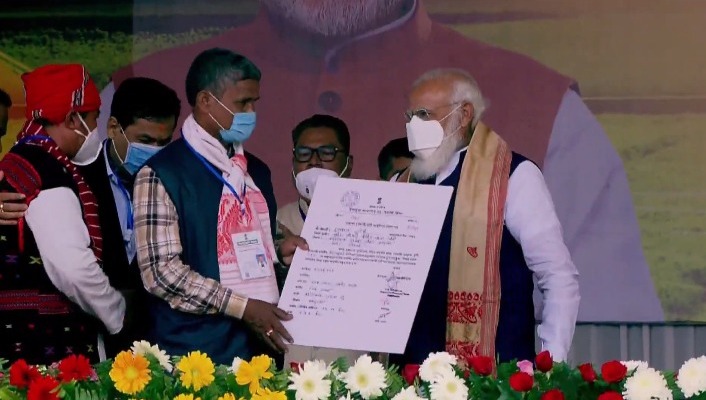 Prime Minister Narendra Modi today arrived at Sivasagar in Assam, where he will be distributing 1.06 lakh land allotment certificates to beneficiaries.

Addressing a gathering at the Jerenga Pathar, Modi said that the over a lakh landless people’s lives have been secured by the government.

Wishing the people of Assam on New Year and Bhogali Bihu, Modi said, “The nation is celebrating the 125th birth anniversary of Netaji Subhas Chandra Bose and we celebrated this day as Parakram Divas.”

Upon his arrival Modi paid tributes to Joymoti, a native princess of Assam who sacrificed her life for her husband at the Jerenga Pathar in Joysagar, Sivasagar District of Assam.

Modi’s visit to the state assumes significance as the state is headed to Assembly Elections likely to be held in April this year.

Appreciating the efforts of the people of Assam, PM Modi said, “The fast-paced development of Assam is very important to us. The way to ‘Atmanirbhar Assam’ is through ‘Atmavishwaas’ (self-confidence) among the people here. 40 per cent of the state’s population is taking benefit of ‘Ayushmaan Bharat’ scheme of the Central government.”

Lauding the efforts of the Assam Government in handling the COVID-19, Modi expressed his confidence that the state will take forward the vaccination drive now. He further appealed the people to get vaccinated.